The following is a guest post from the very talented author, Carmen Baca.
Although her focus is on the marketing of books, the principles are relevant to all venues

In the three years, I’ve been an author, I’ve figured out a few marketing strategies that work for me, not for all, mind you. While I queried publishers, I wrote to twelve famous authors for advice about marketing due to my being a New Mexico Hispanic and because our culture is underrepresented in literature. The consensus of the five who graciously replied was that exposure is what I needed for acquiring readers and generating sales. So that’s what I did. 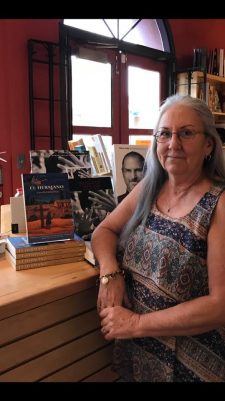 PRE-PROMOTING PRIOR TO BOOK RELEASE

I created a website, a blog site, got on Twitter, LinkedIn, and Instagram and started experimenting without knowing what I was doing. All those failed to lure readers, by the way, all except FB. This is where my readers were engaging with me and follower numbers rising, so I concentrated on it. And because of my ignorance, I started promoting fifteen months before my book published because I didn’t know my first publisher would take so long. However, that act of ignorance worked (and still works) to my benefit. I told everyone about my book for so long and used so many short excerpts and photos that the week the book released, it sold out on Amazon and in my local bookstore four times. I still promote my works months in advance.

A couple of reasons why Facebook works for me has to do with the genre and reader demographics. That’s probably why it doesn’t work for all authors. I don’t write a genre that’s common: I write regionalistic literature. This means I appeal to a certain region and to people who want to know more about the region. The subject matter I include is due to my culture being a large contributor to my novels and short stories.

The reader demographics are women my age or older. The majority of the reader population have only FB, no other social media accounts, so there’s no way else to reach them. However, because so many of them won’t do online shopping, they can’t leave reviews on websites. They do leave reviews on my page though. They also prefer buying the books from me, signed and with custom-made bookmarks. I sell hundreds of books from my page, but it does nothing for Amazon ranking based on sales and reviews. So my books will never reach a high rank (the first one about the Brotherhood got to #32 once; I about fainted). That one has the best sales record and the most reviews. So anyway, that’s why FB works for me but doesn’t work for all authors.

As for my other platforms, every once in a while I update my website and post on LinkedIn, which I don’t understand how to use at all. I tweeted till I was even more confused about Twitter, and I post once in a while on my Flipboard Magazines and in my Pinterest author collections about my books. This is what I discovered about other means to gain online visibility.

Above all, find social media platforms where you can connect with your fans and communicate with them daily. They love that they can talk to a “real author.”

I’d probably still be avoiding Twitter and stagnating at 190 followers but for a kind author who took me under his wing and tutored me in Twitter and tweeting.

Following the tutorial below, some of which I learned from my friend and some of which I discovered through more experimentation, I followed these steps to go from 190 to over 4,600 in four months. If you keep reading, I’ll explain how important the number of followers is on Twitter.

Participate in #FF (Follow Fridays) #WriterLifts, and #TwitterTrains when you can, especially as you’re building your following. When you see those hashtags, join in the train of followers by following them, liking, RT (retweeting), and commenting a thank you for the opportunity to get more readers. Engage. Don’t tweet with a comment though (something about algorithms).

You get the idea.

Remember to keep an important tweet pinned for easy retweets and change it after it gets a few tweets, maybe 7-10. I like to keep my tweets rather than delete them after they no longer apply because I’ve noticed when a follower takes an interest in me, he/she will go back and see my tweets and like them, so I figure the engagement by leaving them there serves a purpose too. Some writers delete the tweets after they served their purpose.

I like to tag specific influencers like magazine editors or radio talk show hosts who promote for me. They retweet my tweets to their followers, and word gets out for sales. I use @KRTN or whatever to get the attention of influencers; find your influencer handles and use those you want to attract. (Natalie Morales of NBC-Today, liked one of my tweets once). Just keep your @handles to a bare minimum and alternate with different tweets. You don’t want to become a pest.

One writer who took me under his wing is now promoting my books to his 79K followers. Think about it—those you follow have hundreds of thousands of followers combined, and those get retweeted and seen by that guy’s followers and so on. The reach is incredible—doesn’t measure up with Facebook at all. On FB I can reach up to 30K in nine countries, but on Twitter, I can reach well over that. Let me share an experience—I participated in Twitter pitch mad on Thursday, September 5, 2019. My pitch to agents was retweeted by 108 followers (can you imagine how many people that reached?). Because of the exposure, my pitch attracted 1 agent and 2 publishers. Don’t discount Twitter; learn to make it work for you.

The following is a guide to creating tweets others will want to engage in and possibly retweet, which is what you want to generate all those thousands of eyes who will read or scroll past.

Use your pronouns—each tweet should be written with the following in mind:

All of my tweets clearly indicate “My story…” and while we may view this as egotistical, remember these tweets are viewed singularly. You’re telling them you achieved some goal, you’re not lauding someone else. Like the query or the book pitch, a tweet has to hook a reader’s attention or he’ll keep scrolling. My friend also cautioned me that when posting images (like I do when promoting a book or short story), don’t bother with text on the photo; it doesn’t get seen. (I do this anyway).

My writing skills in both English and Spanish enable me to write with true storytelling talent (I’ve been told). My experiences growing up amongst los Hermanos Penitentes, traditions, and folklore permit me to tell the story of my father’s entrance into the secret society of the Penitente Brotherhood. Living on the land left to us by my father, my husband and I enjoy a peaceful county life in northern New Mexico with our furry friends. Visit me on Facebook and Twitter